Since 1965, Head Start has served millions of children and families across the United States. There are approximately 2,000 Head Start and Early Head Start grantee agencies providing an array of child and family development services. CHTOP operates three such programs in Durham and Orange Counties.

We encourage you to apply if you feel that you are eligible for the Durham Head Start & Early Head Start Program. Families with the greatest need are selected for enrollment each year.

Orange County is composed of two distinct areas that conform to the two school districts that serve the county. The Chapel Hill-Carrboro area is in the southeastern corner of the county and is home to the University of North Carolina, and its 20,000 students. With more than half the county’s population, the Chapel Hill-Carrboro area has its own school system. The rest of the county is mainly rural with social, educational and economic conditions that are typical of other rural areas in the state. The Orange County school district serves the rest of the county.

DURHAM: Are You Eligible for HS/EHS?

DURHAM: How Can You Apply?

If you wish to apply, please fill out the digital application (below) and submit it today. Remember, there is a waiting list of many other families who want to enroll their children so good luck.

Applications are available in English and Spanish:

In addition to submitting the application above, you may be asked to provide the following information later.

To qualify for enrollment in the Orange County Head Start and Early Head Start program, families must meet the poverty guidelines that are established by the US Department of Health and Human Services.

At time of enrollment, families must provide documentation to demonstrate that they are living at or below these guidelines.

Click on the table below for Head Start enrollment applications (in English or Spanish) that you can print, fill out and mail along with additional required documents to:
Orange Co. Head Start and Early Head Start
4220 NC-55, Suite 300
Durham, NC 27713

All Head Start families receive an array of individualized services based on each family’s situation: their strengths, needs, goals, and aspirations. Families who qualify for center-based services receive high quality child care/education at low or no cost. Families who qualify for the home-based option are offered parent-child playgroups and weekly home visits focused on parent education and child development. All home-based and playgroup services are offered in Spanish and at no cost to enrolled families

When a family enrolls in Head Start, they are given a thorough assessment and then they have an opportunity to develop their own individualized plan for their family based on their circumstances and their goals and objectives. Head Start staff then helps the family achieve these goals.

In order to provide this array of services with limited funding, a fundamental philosophy of collaboration is the foundation for program operations. Program staff works with many area organizations to assure that Head Start families are provided the resources they need to make a real difference in their lives. Collaborators include:

A special collaborative relationship has been developed with the Orange County Schools which is providing classroom space at three of their elementary schools. A goal for the OC Schools and the Head Start program is to expand into the other elementary schools in Orange County so that each of their schools will have a Pre-K classroom for children who will be enrolling in that school the following year.

In Head Start, parents are regarded as their child’s primary teacher. Parents are involved in all aspect of the program from volunteering in the classrooms to participating on the Head Start main decision-making board, the Head Start Policy Council. 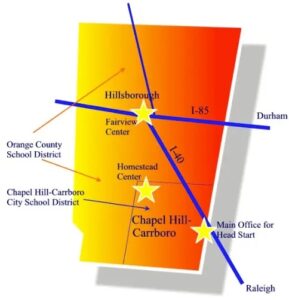 Our children and families have looked to us for strength and assistance and we have worked to answer that call. Join us.